Soft Cinnamon Rolls recipe is an absolute no-fail easy homemade cinnamon roll recipe filled with cinnamon and covered with cream cheese frosting. Vanilla pudding in the dough keeps the whole roll soft not just the center. Although yeast is involved, I promise you can make these perfect cinnamon rolls from scratch easily for breakfast or for a special occasion like Christmas morning.

I’m not one for surprises. I remember when I was nine months pregnant with my second son I had spent the afternoon making homemade cinnamon rolls for a friend. My love for cooking and my huge belly never played well together.

If you’ve seen me pregnant you know that my babies like to lay Superman style in my abdomen. Don’t make me show you a picture. By the end of the day my belly was covered in whatever I was making that day in the kitchen. 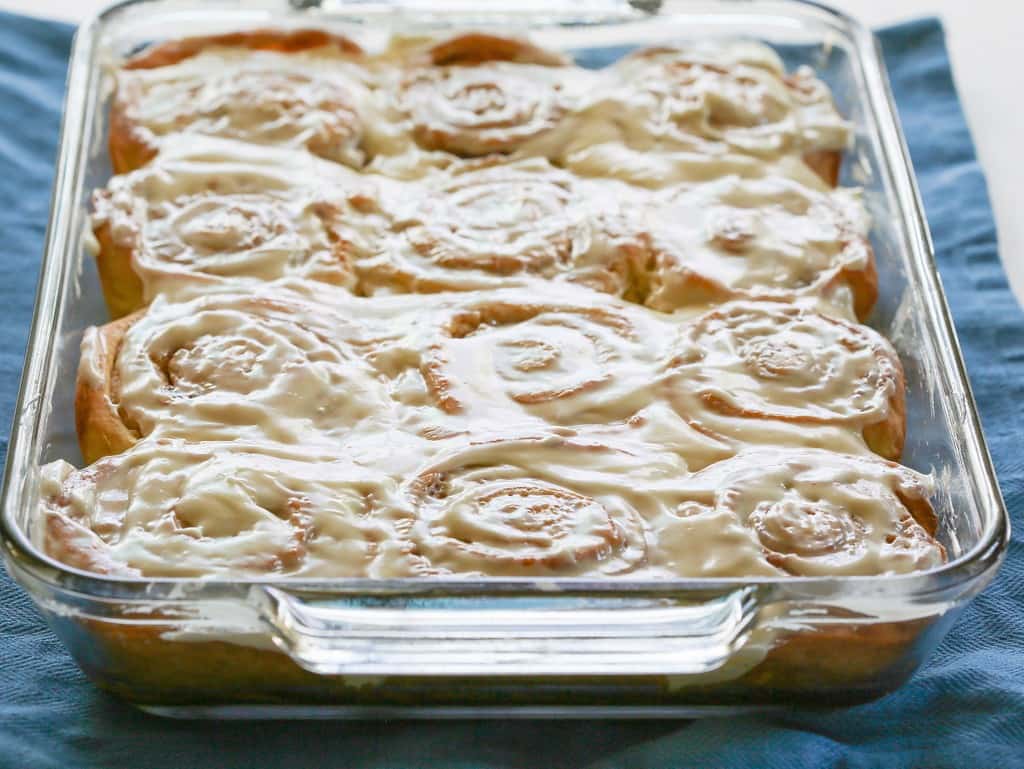 Most of it I tried to wash off but considering I couldn’t see under my belly, the treasures of the day’s adventures hid on the underside. On this particular day I had tons of flour all over my belly. I don’t know why I didn’t have an apron on but I had tried to kind of pat the flour off my blue shirt.

Changing clothes wasn’t an option because if you’ve been 9 months pregnant you know that there are about two shirts that fit you those last couple of days.

So I headed out the door with my flour dusted belly, scarce makeup, and cinnamon rolls in hand to give to my friend. I hollered to my husband that I would be home in a half hour. He said something along the lines of aren’t you going to change?

I should have known something was up then because my husband has never, except for that instance, said anything like that regarding my appearance in our marriage (although I’m sure there were many times he wanted to). 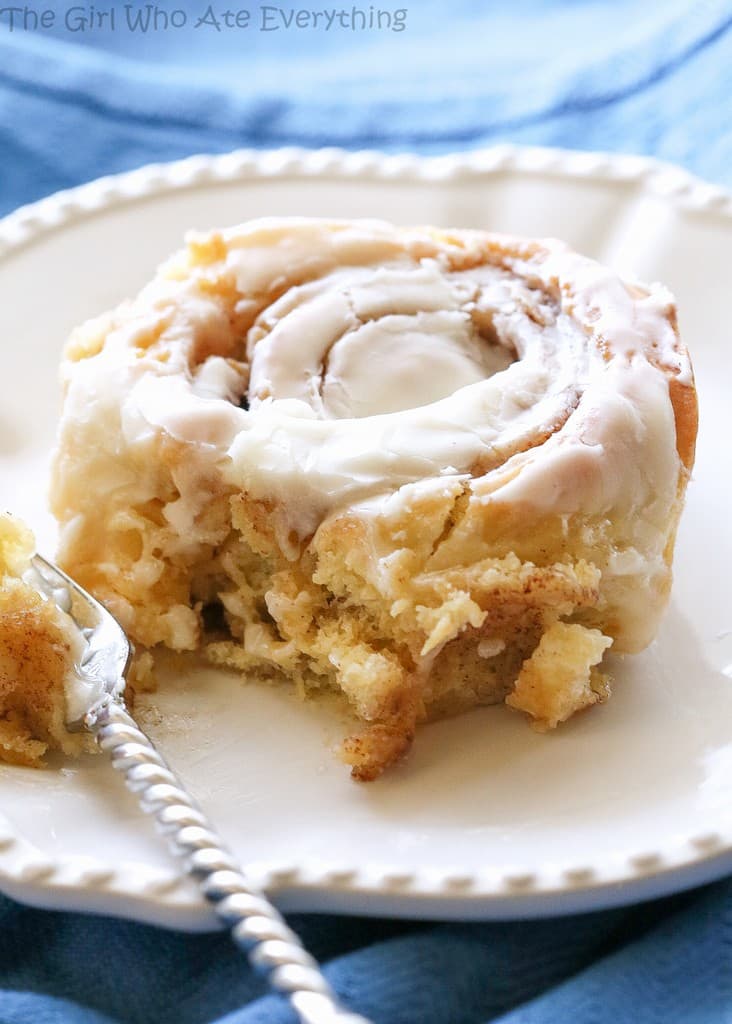 I headed to my friend’s and walked into a house filled with people for…MY surprise baby shower. And boy was I surprised. As I excused myself to the bathroom I was horrified to see my appearance.

It was then that I realized I don’t like surprises. I don’t like all of the attention on me (which is why I struggled with my cookbook release). I don’t like feeling like I have to react in a way everyone expects me to. I like to know what’s going on.

So now every time I make homemade cinnamon rolls I throw a little flour on my belly for good luck and think about that moment.

HOW TO GET YEAST TO RISE 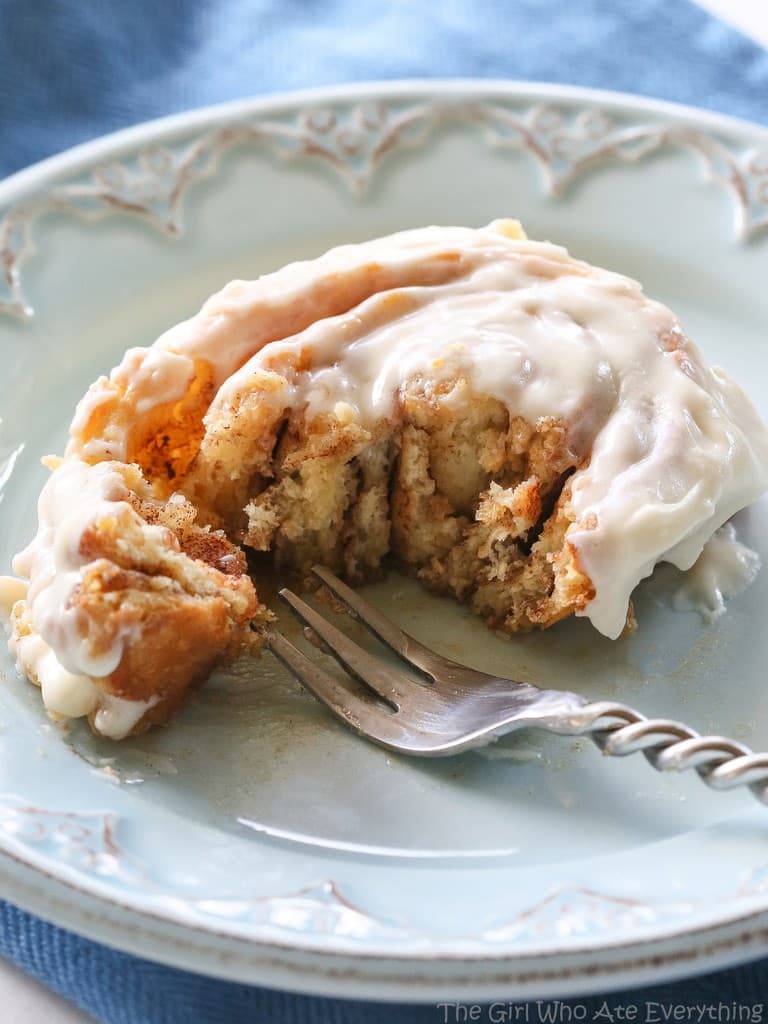 I know many of you love these Cinnabon cinnamon rolls and I do too! They’re fabulous but in my opinion these are the best cinnamon rolls.

But I’m a food blogger and I’m always looking for another fabulous version of everything.

You know how the middle of a cinnamon roll is the best part? Well these rolls stay so soft – the entire roll. I ate about a dozen which was fine because it made two. These are divine!

HOW TO MAKE CINNAMON ROLLS

The best frosting for cinnamon rolls is cream cheese frosting.

8 ounces of cream cheese, 1/2 stick of butter, 4 cups of powdered sugar, and vanilla.

CAN I MAKE CINNAMON ROLLS THE DAY BEFORE?

Yes. If making ahead of time cover and refrigerate after the unbaked rolls have been rolled and sliced instead of a second rise. The next morning, when ready to bake remove from the fridge and allow rolls to rise.

Use dental floss. Unflavored of course. Just slide it under the roll and cross over the top to cut cinnamon roll dough without squishing it. Sure a sharp knife will work as well but this is way more fun! 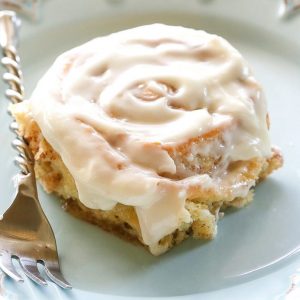 Source: Allrecipes; increased the cinnamon.
Freezing Instructions: To freeze rolls, place them on a baking sheet after they have been rolled and cut. Wrap in plastic wrap and foil and freeze. Thaw rolls at room temperature and allow to rise. Bake as directed. 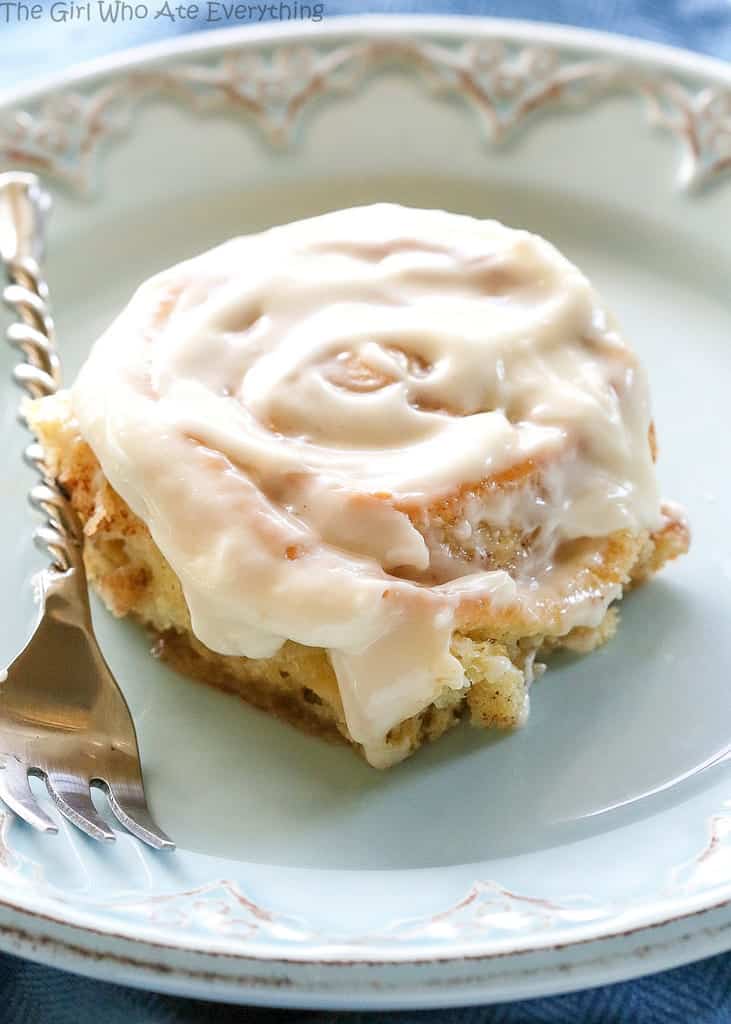